With a huge percentage of “cry wolf” jobs the Service attend to day in day out, it’s hardly surprising that a small amount of cynicism and complacency can build up.  So, when the cynicism has built up far enough that you’re suddenly presented with a real job that metaphorically bites you on the bum . . . I kind of like it.  It’s like a much needed reality check that brings you slam-bang down to earth and reiterates everything you’ve ever learnt about showing prudence with your patients.

Our job had come down as 28 year old male, CVA (stroke) . . . called by, the patient.  I was stood outside the entrance to the small set of flats with the crew.  No answer to the door and no answer from any of the neighbours.  The sun beat down on all of us in our thick green cotton uniforms as we patiently waited for the police to arrive and gain entrance. 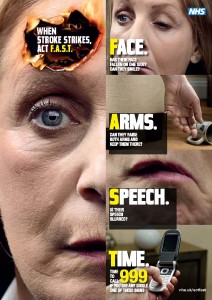 Some kids came round the corner mentioning that they thought they could hear cries of help coming from the patient’s window.  The crew stayed by the door whilst I followed the kids round to where they meant and sure enough I could just make out some muffled cries coming from a small open window one storey above me.

Going back round to the others I found they’d already started “contingency plans”.  A neighbour from across the way was currently handing over a hammer to one of the medics and within a few seconds we had gained entrance into the set of flats.

My cynical thoughts clouded my mind . . . 28?  CVA?  Yeh, right.  Fat chance.  It’s just going to be another idiot with a headache . . . probably been drinking the night before too!  Oh, and what’s this?  Front door ajar?  Having a stroke AND managed to get the front door open for us . . . seen THAT one before!

We entered the flat and instantly found our patient in the kitchen lying face down in a pair of boxing shorts, his mobile phone in one hand.  He was a well built and surprisingly muscular lad and certainly didn’t fit the bill for a classic Stroke victim.

Rolling him carefully onto his back we set about doing checks and getting information.  I don’t know why, but I guess my previous cynicism was still prying and so I went for the “pseudo collapse” check . . . this consisted of lifting an affected arm over the patient’s face and dropping it.  Any form of pseudo-ism would result in the arm “miraculously” altering it’s path before slamming into their face.

Our patient’s arm slammed into his face.

Not content with one confirmation I went and did it again!  And lo and behold, slam!  Straight back into his face – poor bloke.  Any further cynicism was instantly vanquished . . . especially as at the same moment one crew member confirmed a positive plantar reflex in the feet (Babinski response) and the other confirmed a full FAST positive response. 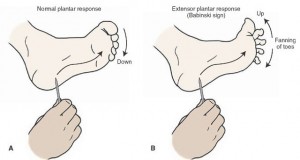 Within seconds we had the patient in the Ambulance chair and were heading down to the truck.  And before long we had him as comfortable as possible in the bed ready to go.  At that moment the patient’s wife arrived banging on the back of the truck.  And after a few seconds calming her we let her on and allowed her to comfort her husband.  No amount of muscles can account for genuine fear.  And as the tears streamed down both their faces his good hand squeezed tightly into hers.

Time was now very much of the essence.  So, I jumped out and into my car and followed the crew behind.

Our initial thoughts were leaning toward an SAH (Subarachnoid Hemorrhage) due to his story . . . he’d returned home from work and was just getting changed when he had the classic “thunder clap” headache round the back of the head.  And within a minute he was collapsed on the floor completely paralyzed down one side.  The only medical history alluding to this outcome was his lifestyle – characterised by known hypertension (high blood pressure), hugely fatty foods and large amounts of cigarettes and alcohol.

After leaving the patient in resuss to be fully assessed we retreated back to the truck to talk about it.  I wasn’t alone in my cynicism in finding a genuine patient back there.  The crew didn’t believe it either.  Not at that age.  Not under the circumstances presented to us.  But we did all agree that that it was good once in a while, to have these little wake up calls – to be reminded that “real jobs”, as rare as they may statistically appear, are always going to be just a one touch of an MDT button away.

After my paper work and goodbyes I jumped back in the car and headed back out.